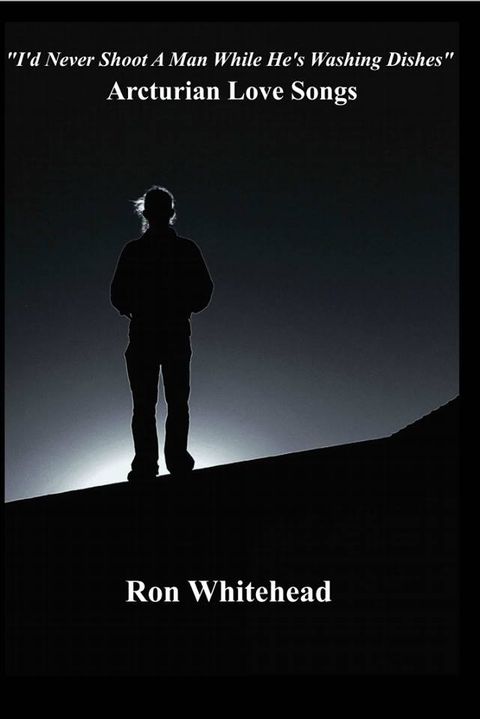 To Jinn with love:
The 69 eclectic poems in my new book, “I’d Never Shoot a Man While He’s Washing Dishes: Arcturian Love Songs,” are a reflection of the deep and abiding love I have for my beloved Jinn Bug. These storied poems reveal the chaos, the tumult, the magic, the secrets, and the mystery of our nearly 7 years together. — Ron Whitehead

Poet, writer, editor, publisher, scholar, professor, activist Ron Whitehead grew up on a farm in Kentucky. He attended The University of Louisville and Oxford University. As poet and writer he is the recipient of numerous state, national, and international awards and prizes including The All Kentucky Poetry Prize, The Yeats Club of Oxford’s Prize for Poetry, and many others. In 2006 Dr. John Rocco (NYC) nominated Ron for The Nobel Prize in Literature. He was a college/university professor for over 20 years. He was inducted into his high school’s (Ohio County High) Hall of Fame, representing his 1968 graduating class.

Ron has produced over 2,000 Arts Events, Happenings, and Festivals throughout Europe and the USA. He has performed thousands of shows around the world with some of the best musicians and bands on the planet. He recently returned from a Scandinavia Tour with French rock band Blaak Heat and from two New York City trips where his new books “blistered asphalt on dixie highway: Kentucky Basketball is Poetry in Motion” was released by Finishing Line Press at the historic Poets House, and “DISOBEY” (with Jinn Bug) was released by Underground Books at The New York City Poetry Festival.

Ron’s work has been translated into nearly 20 languages. He is the author of 30 books and 40 cds. His newest book is Quest for Self in the Ocean of Consciousness: Ibsen, Hamsun, Munch, Joyce: The Origins of Modernism and Expressionism was published by Cook Creative. His two newest albums are “PRAYER,” with Harry PIckens on piano and Aaron West on violin, and “THE STORM GENERATION MANIFESTO & Other Rock n Roll Poems,” with The Storm Generation Bands both released by sonaBLAST! Records. “PRAYER” was nominated for a Spoken Word Grammy.