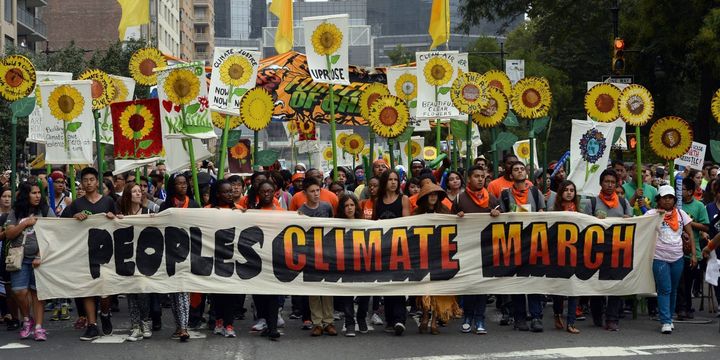 Do you want our local and state politicians to do more to address climate change? So do we! Mayor Fischer has proclaimed Oct. 14th “People’s Climate Action Day;” now we’re asking him to act. Observe the day with us in a march in solidarity with the national People’s Climate Movement (PCM). Meet up at 6th and Broadway at 4:45 pm. From there we’ll take a looping downtown route with a stop at 5:30 for a rally on the steps of Metro Hall. We’ll end where we started, a distance of about 1.7 miles. Bring your signs and your voices. RSVP on Facebook and also on the PCM event page: http://peoplesclimate.org/action/peoples-climate-march-louisville/

From http://peoplesclimate.org/:
The People’s Climate March on Sept. 21, 2014 signaled to both U.S. and global leaders that large numbers of people in the United States cared about the climate crisis. Not only was the march the largest action on climate in history, but we successfully changed the notion that climate change was just an environmental issue. The march made it clear that this is also a social and economic justice struggle. Building off of the energy and success of the march, the People’s Climate Movement was formed to continue to build on that energy and excitement and expand across the country.